PASI seminar on “Numerical Methods and their Application in Bioengineering” 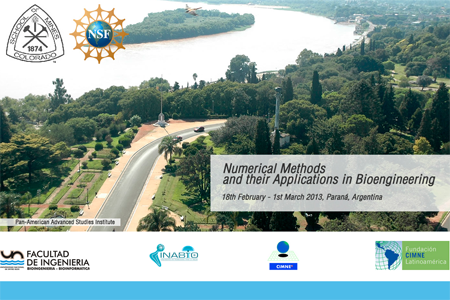 The PASI course is supported by the US National Science Foundation (NSF), which finances both lecturers and students participation, organization at the host institution and general logistic. In this way, no tuitions fees were charged to participants. The seminar included an unusual combination of finite element, boundary element and discrete element methodologies in a single framework; a combination rarely encountered in a traditional university course, including hands-on sessions in computer labs provided by the host university.

Case histories related to prostheses, valves and modeling were presented.

Both the US organizations and the Aulas CIMNE Network taking part in this workshop are currently implementing several initiatives to consolidate collaboration, strengthen the existing networks of engineers and scientists in the U.S. and Latin America, with expertise in computational modeling directed at applications in bioengineering.

The course was attended by US students from : Colorado, Florida, New York, Texas and Latin American students from Aulas CIMNE in Argentina, Colombia, Ecuador, México, Perú and Venezuela.